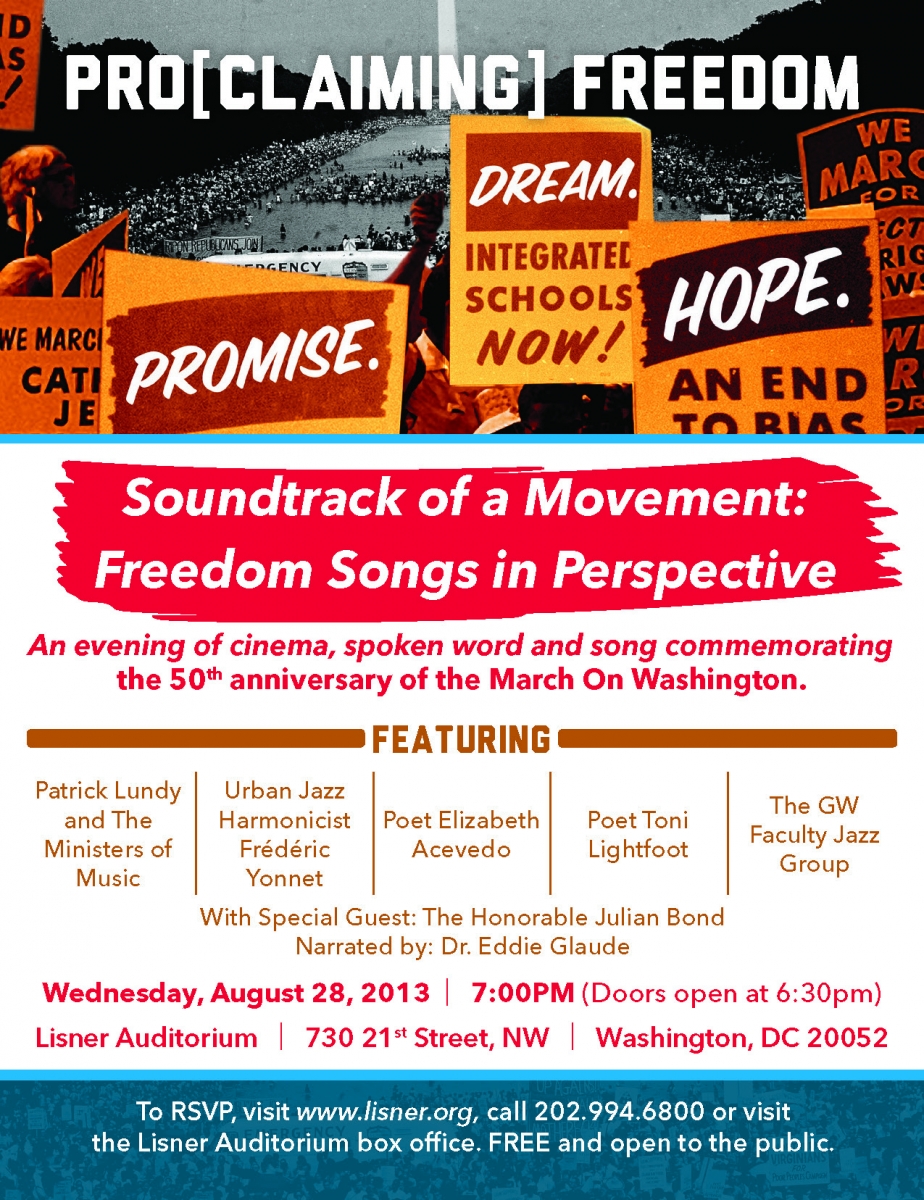 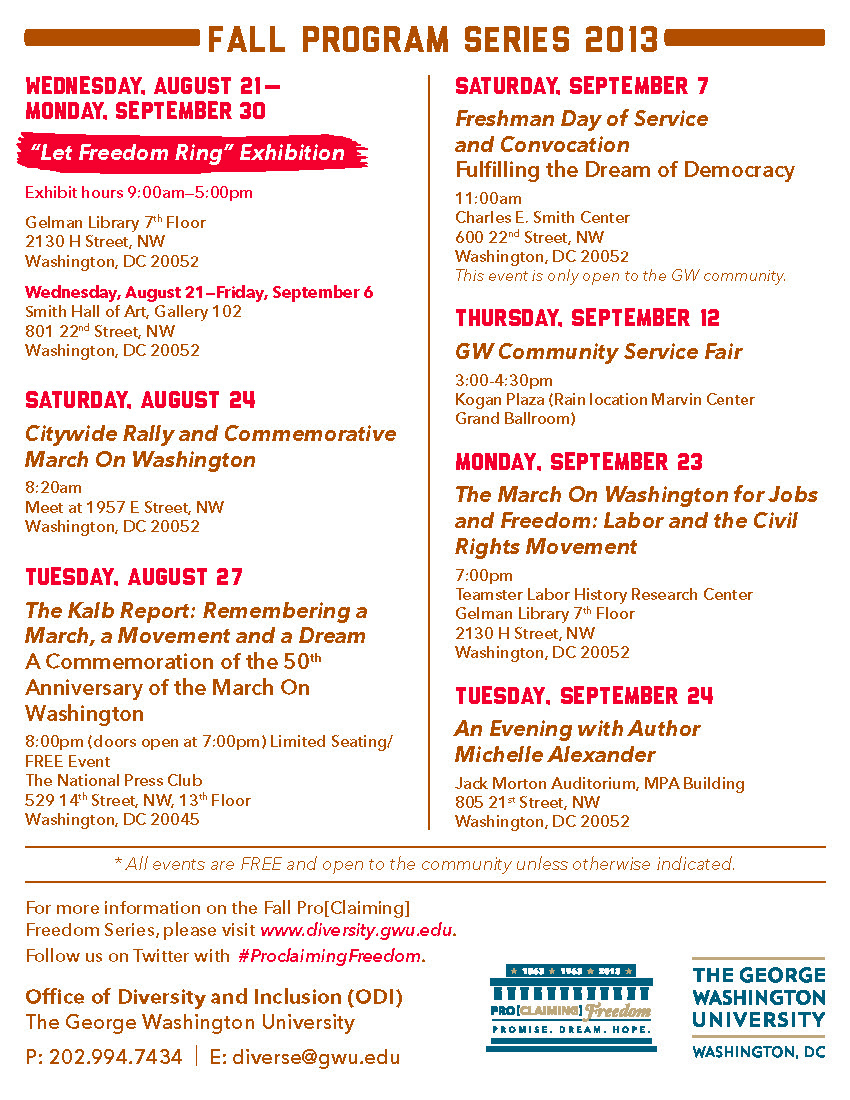 Soundtrack of a Movement: Freedom Songs in Perspective

GW celebrates the 50th anniversary of the March On Washington with a special evening of cinema, song, and spoken word narrated by Dr. Eddie Glaude. Evening highlights include performances by GW faculty, alumni and students, and spoken word artist Toni Lightfoot, as well as footage from the award-winning documentary Soundtrack For A Revolution. There will be reflections from Julian Bond, who stood with Dr. King during the March, and musical tribute by Patrick Lundy and The Ministers of Music featuring urban jazz harmonicist Frédéric Yonnet.

A powerful photographic remembrance of great struggle, hope, and change for our country   ̶  the Civil Rights Movement.

Don your favorite GW gear and join the GW community as we participate in the District of Columbia statehood rally led by Mayor Vincent Gray and the national commemoration of the 50th anniversary of the March On Washington.

The Kalb Report: Remembering a March, a Movement and a Dream

Live TV taping of The Kalb Report with legendary journalist Marvin Kalb on the role of the press in the Civil rights Movement and its application for the digital age. Sponsored by the GW School of Media and Public Affairs and The Nation Press Club.

Freshman Day of Service and Convocation: Fulfilling the Dream of Democracy

Join the class of 2017 for the 5th annual Freshman Day of Service and Convocation as we serve at 37 locations in Washington, DC, as well as in Maryland and Virginia. Keynote speaker: Roslyn Brock, Chairman, NAACP National Board of Directors and GW Trustee. For more information, visit www.serve.gwu.edu. This event is only open to the George Washington University community.

The March On Washington for Jobs and Freedom: Labor and the Civil Rights Movement

Panel discussion highlighting the importance of economic equallity to the civil rights movement and the role of organized labor in the 1963 March On Washington. Norman Hill (former director of the A. Philip Randolph Institutre and an on-the-ground organizer of the 1963 March) will share his first-hand account of the March's origins and vision. William Jones (professor of history at the University of Wisconsin) will discuss his new book, The March On Washington: Jobs, Freedom, and the Forgotten History of Civil Rights. 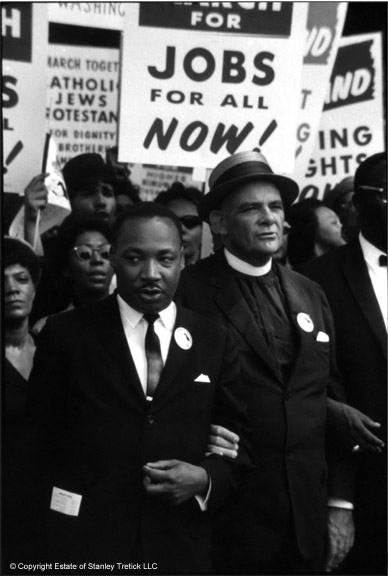 An Evening with Author Michelle Alexander

Please join us as NYT Best-selling author Michelle Alexander discusses her book, The New Jim Crow: Mass Incarceration in the Age of Colorblindness. For more information on tickets and registration, visit the eventbrite page.

"The New Jim Crow is a stunning account of the rebirth of a caste-like system in the United States, one that has resulted in millions of African Americans locked behind bars and then relegated to a permanent second-class status—denied the very rights supposedly won in the Civil Rights Movement."

Alexander’s talk will be preceded by a panel on “Race and Rights in the 21st Century” with the following guests:

Bruce Spiva of The Spiva Law Firm PLLC, is former Chair of the Board of DC Vote dedicated to voting rights for D.C. residents. He testified before Congress on behalf of the D.C. Voting Rights Act for full congressional representation. A graduate of Harvard Law, he served as an editor of the Harvard Law Review, and specializes in antitrust, consumer protection and class actions.
Edward Hailes, Jr. is Managing Director and Counsel for The Advancement Project and former general counsel for the U.S. Commission on Civil Rights, directing the agency's investigation into voting irregularities into the Florida 2000 presidential election, and policing and civil rights in NYC after the Amadou Diallo shooting. Hailes served as NAACP counsel for ten years and is a graduate of Howard Law.
Natalie Hopkinson, author of Go-Go Live: The Musical Life and Death of a Chocolate City, is a fellow with the Interactivity Foundation and has contributed to the Post, NY Times, Essence, and NPR.  She holds a PhD in Journalism from UMD, College Park, and an undergraduate degree in political science from Howard.
Christopher Bracey is Senior Associate Dean for Academic Affairs and Professor of Law at George Washington University. He specializes in the legal history of U.S. race relations, constitutional law, criminal procedure, and civil rights. A graduate of Harvard Law, he is the author of Saviors or Sellouts: The Promise and Peril of Black Conservatism, From Booker T. Washington to Condoleezza Rice.

The Influence and Perspectives of Women Pro[Claiming] Freedom: SNCC Women Then and Now

The Influence and Perspectives of Women Pro[Claiming] Freedom:  SNCC Women Then and Now. Discussing the influence and perspectives of women active in the struggle for freedom and equality, invited guests – editors and contributors of Hands on the Freedom Plow: Personal Accounts by Women in SNCC – will highlight the centrality of women in the ever-evolving narrative of the pursuit for freedom and equality. A question and answer period and reception will follow. For more information about his event, please visit the eventbrite page.

View the video of the SNCC Women Than and Now event

Pro[Claiming] Her Story!  Dr. Bernard Demzcuk, assistant vice president for external affairs and local artist Laura Era will discuss the life and contributions of Anna Carroll, a trusted yet forgotten advisor to President Abraham Lincoln.  Laura Era is the artist who restored Anna Carroll into her rightful place in Francis Bicknell Carpenter's painting "First Reading of the Emancipation Proclamation."

As part of the celebration of the life and legacy of Reverend Martin Luther King, Jr., the George Washington University will host an evening forum entitled, "Complicated Legacies: Lincoln, King and Obama" on Monday, January 28 at 6 p.m. in the Elliott School of International Affairs (1957 E Street NW) room 113. Join us as our distinguished panelists—Dr. Eric Foner, Dr. Eddie Glaude and Dr. Edna Medford—discuss the accuracy of deeply held views about Lincoln, MLK, the Emancipation Proclamation and the March on Washington, and the relevancy of these competing views today in the age of Obama. For more information about this event, please visit the eventbrite page.

View the GW Today article about the Complicated Legacies event